By 1978, "in an unprecedented move, [President Carter] invited new Prime Minister Menachem Begin and President Anwar Sadat to Camp David to meet privately with him, two leaders that he believed could make crucial decisions."

"There were four basic issues to deal with at Camp David: 1) a peace treaty and normalization of relations between Israel and Egypt, 2) demilitarization and removal of Israeli settlements from the Sinai, 3) linkage between these issues and the future of the West Bank and Gaza, and 4) a statement on principles, including Israeli withdrawal from all occupied territories and the right of Palestinians to self-determination."
CLICK TO EXPLORE OBJECTIVES OF THE THREE LEADERS (USE ARROW KEYS TO NAVIGATE)

Notes for Carter from Secretary of State Cyrus Vance 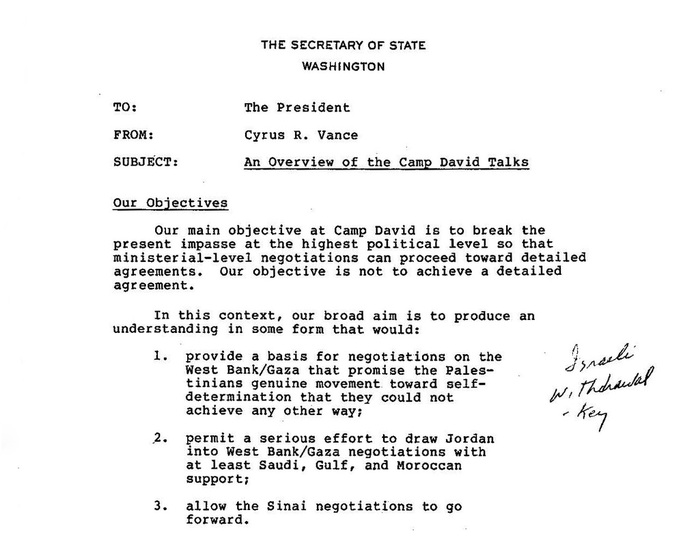 "Three scheduled days at Camp David turned into thirteen intensely frustrating ones...Carter found both Sadat and Begin clinging to old arguments and repetitious statements. After two days, despite some amicable moments, President Carter felt that more progress could be made if they did not meet directly. He spent much of his time listening intently to heated arguments and realized that a whole new approach was needed. By Saturday, September 9, Carter worked...to draft an American proposal. President Carter implemented a "single text" strategy. The draft incorporated the needs and requirements of both sides. Then he took this draft separately to each party for points of agreement and disagreement. After twenty-three drafts and continuous debates on wording, the U.S. delegation came up with a final framework agreement on Sunday, September 17, that the Egyptians and the Israelis could agree on."

-"Thirteen Days After Twenty-Five Years"
On September 17, 1978, Begin and Sadat reached a tentative agreement and signed the Camp David Accords. While Begin conceded the Sinai Peninsula, Sadat conceded the West Bank. Both sides agreed to a framework for peace in the Middle East and promised to quickly negotiate a peace treaty.